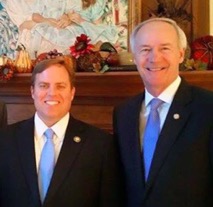 During the recent public corruption trial of convicted felon Jon Woods many revelations came out in open court. Woods was convicted on 15 of the 17 charged crimes including conspiracy, honest services wire fraud, honest services mail fraud, and money laundering. Wood’s friend Randell Shelton was also convicted on similar charges for directing the GIF taxpayer money from Ecclesia College back to Jon Woods as a kickback/bribe for directing the tax money there in the first place. Former State Representative Micah Neal and former Ecclesia College President Oren Paris pleaded guilty before trial for their roles in the kickback/bribe scheme.

Conduit News had a representative in the courtroom of the Jon Woods trial to take notes and report on what came out in open court. Text messages and emails between Oren Paris and Jon Woods were part of those revelations that came out in open court. One exchange of these messages discussed a meeting between then Senator Woods and Governor Asa Hutchinson that took place on or about July 1, 2015. Woods texted Paris “about to get on road to see Asa” at 9:59 p.m. on June 30, 2015. Paris responded, “Hope it goes well, holler if you need me.” At 10:09 p.m. there was a call from Woods to Paris.

The next day, July 1, 2015, a communication from Woods to Paris stated that he had visited with the Governor and had shown him the appropriation bills he was working on to direct more money to Ecclesia college. Wood’s message states that Asa was not interested in using money under his control as part of what Woods was doing. Woods stated in the message to Paris that Asa’s then Chief of Staff Michael Lamoureux had told him that the Governor would help and that he had been “duped” by Lamoureux. As a Senator, Michael Lamoureux had directed $100,000 of GIF taxpayer money to Ecclesia College at the direction of Senator Woods according to trial testimony and GIF grant records. Woods also stated that Asa thought Paris was a good guy and he liked him and that it was nothing personal against Paris.

In response to Paris’ inquiry, Woods says that Asa told him he wanted nothing to do with medical marijuana but that they had discussed the idea of funneling medical marijuana tax money to Ecclesia College. Woods then states that Asa mentioned that he didn’t think Oren Paris would ever go for that idea. Woods states he told Asa that Paris was fine with it.Paris responded that he was against medical marijuana, but that if it passed he would accept tax dollars generated from selling it. Paris then said, “I think it is great to take money from Satan and the Kingdom of Darkness and put it to work for the Kingdom of God.” Jon Woods texted back “agreed.”

The next day, July 2, 2015 Woods emailed Paris a draft copy of a bill that would have directed tax proceeds from medical marijuana to Ecclesia College.

While the above meetings and messages don’t implicate Gov. Asa Hutchinson as a co-conspirator or of any other explicit crimes, it does show ASA KNEW the type of schemes that Jon Woods was involved in with Ecclesia College. ASA KNEW Woods was doing everything he could to get money to that college, including the passing of a medical marijuana amendment for taxes to funnel to Ecclesia.

Even though ASA KNEW, just a few months later he hosted a fundraiser for Senator Woods’ re-election campaign. 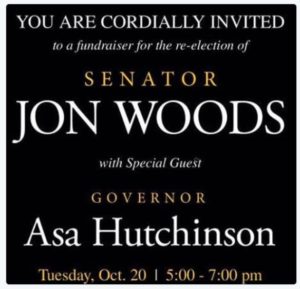 This seems to support the statement that Asa has been previously reported to say that he would rather have a corrupt and lying Republican than an honest Democrat.