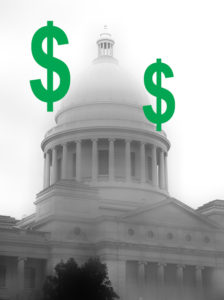 Former Speaker of the House, Jeremy Gillam, received loans from several state Representatives.  The loans from 2016 went unreported until recently. Because of the do-over rule adopted by the legislature there are no consequences for filing false/inaccurate reports.  Once discovered by the public, the public official gets to do over the annual statement of financial interest report with no consequences.

According to the Arkansas Democrat Gazette the largest of the loans was a $16,000 loan from Representative Joe Jett (R) which was made in the fall of 2016. The article notes that shortly thereafter Gillam appointed Jett as the chairman of the prestigious House Committee on Revenue and Taxation for 2017-18.[i]

Rep. Jett fired back at the newspaper on social media saying:

“I’m saddened and disheartened by this newspaper taking a story of friendship and goodwill to a place where it cast doubts on peoples good and honorable intentions.  The fact remains, just because a person is a legislator does not preclude him of the obligation of being a friend.”

It was just a loan to help a friend… Sounds familiar? Where have we heard that before?

Oh yes, we heard that when a $30,00 loan from lobbyist Bruce Hawkins to Senator Jake Files was belatedly reported. Files used part of the money to cover hot checks. The story about the loan to Files was broken by the liberal Arkansas Times which quoted Hawkins as saying:

“I loaned money to a friend. It was a business decision. In addition to being my friend, he also happens to be a legislator.”[ii]

Since the lobbyist and the legislator were friends everyone said that’s okay we won’t worry about the loan. NO, THAT IS NOT WHAT HAPPENED!  There was a big stink over the appearance of political favors and in 2017 the legislature passed Act 1108 of 2017 (SB7) by Senator Keith Ingram (D) to prohibit legislators from receiving loans from lobbyists…. even if they are friends.

Is a loan between legislators different or is there still an appearance of political favors? YES, THERE IS AN APPEARANCE OF IMPROPRIETY, ESPECIALLY WHEN THE ONE RECEIVING THE LOAN IS THE SPEAKER OF THE HOUSE!

Representative Joe Jett was upset by the Democrat Gazette article mentioning that Gillam later appointed Jett as chair of the House Committee on Revenue and Taxation. But this is only part of the story.

Let’s roll the clock back two years on this friendship. Gillam was also Speaker of the House in 2015 and he also appointed Jett as chair of the House Committee on Revenue and Taxation in 2015. What is important to note about the 2015 appointment is Gillam, a Republican, appointed Representative Joe Jett chair of the very important committee while Jett was still a Democrat. Talk about big favors! Gillam received considerable criticism for passing over Republican legislators to appoint a Democrat as chair of that committee and some other committees. The story doesn’t end there.

With Gillam getting heavy criticism from Republicans and Jett wanting to keep his chairmanship, Jett switched parties and kept Gillam from having to look even worse.  The switch made the membership ten to ten.

Gillam received loans from other Representatives as well. The Democrat-Gazette article also noted:

Gillam also filed an amendment to his report for 2015 to disclose that then-state Reps. David Branscum, R-Marshall; Bill Gossage, R-Ozark; and Rep. Jon Eubanks, R-Paris, wrote him checks for $700 each in December 2015. That was after this newspaper reported that Gillam Farms had state tax liens filed against it for more than $2,000. Gillam was vice president of Gillam Farms.

Seven hundred dollars each…. that is an odd amount.

What the Democrat-Gazette did not mention is Gillam had appointed each of them to a chairmanship.

Branscom: In 2015 Gillam appointed Rep. David Branscum as Vice-Chair of the House Health Services Subcommittee of the House Committee on Public Health Welfare and Labor.

Gossage: In 2015 Gillam appointed Rep. Bill Gossage as Chair of the House Management Committee and the Legislative Facilities Committee.[iii]

After reading about the chairs giving loans to Gillam, you might be wondering if an envelope was circulated among chairs to raise money for Gillam, with a sweet thank you card.

None of the legislators mentioned here were freshmen. You would think they would know at a minimum that such financial relationships have the appearance of impropriety.

As for Jeremy Gillam, it was common knowledge that he was in financial trouble and that he was looking for a plush state job. Eventually, Gillam was hired by the University of Central Arkansas in what is essentially a lobbying job and he resigned from the legislature.  He could not have gotten the job without the blessing of Governor Asa Hutchinson.  Just another friend doing something nice for a friend…. Right?

With all this “friendship” going around, is this not ripe for further investigation?

Representative Joe Jett’s social media post basically says to the Democrat-Gazette – How dare you question my integrity.  For fun we will close with another time when Jett thought his integrity was being questioned over a vote. It turned out Jett was wrong about which side won the vote. Enjoy:

[iii] Information on Bill Gossage’s chairmanships was taken off the legislative website after he resigned to take a high paying state job, but we were able to guess how to find the information which appears at: http://www.arkleg.state.ar.us/assembly/2015/2015R/Pages/MemberProfile.aspx?member=Gossage