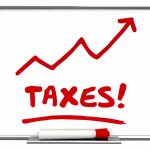 The Tax Reform and Relief Legislative Task Force released its list of possible tax increases. High on its list is increasing the tax on groceries. They say the lower sales tax rate for groceries is a tax exemption that may need to be eliminated. Conduit For Action has a better name for the lower rate on groceries – common sense.

The tax task force is the brainchild of Governor Asa Hutchinson. When he sold his plan to the public he said“The goals of the legislative task force will be ‘fairness, competition, simplification and economic growth.”

So, how does raising the tax on groceries further any of those goals?  You can quickly eliminate it being about “competition” or “economic growth.”  That only leave “fairness” and “simplification.” But does increasing the tax on your groceries have anything to do with fairness or simplification? No!

Here is what the tax and spend politicians know.  If we have another recession or depression, people will spend less on non-essential items and luxury items which means the state will get less sales tax revenue. But by taxing groceries the politicians know the state will have a safe source of sales tax revenue to reduce the impact on government spending in hard times.  They don’t care that when hard times come the increased tax on groceries adds to the taxpayer’s struggle.

Some task force members have suggested the full sales tax rate be applied to groceries but create an income tax credit for low-income Arkansans.

Please explain how filling out a tax credit on your income tax form is simpler than walking out of the grocery store having paid less sales tax (or even better – no tax).

Maybe the tax and spend politicians think it is simpler because, most Arkansans simply would not qualify for a tax credit and the government would simply keep the money.

A FAIR AND SIMPLE SOLUTION

The task force was never about “fairness, competition, simplification and economic growth.” It has always been about distracting voters while working to increase the tax burden.

How about this for a fair and simple solution?  The members should refuse to go along with this farce any longer and resign from the task force.

Who are the members of the Tax Reform and Relief Legislative Task Force?