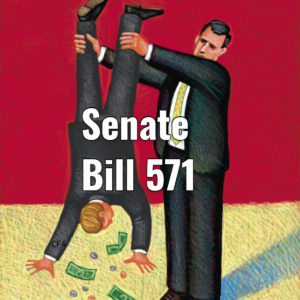 Senate Bill 571 is called the “earned income tax credit.” It is legislation to redistribute wealth to people with lower income.

It is a spending program. If the credit is greater than what the person owes in state income taxes, the person gets to pocket the money given by Arkansas.

Liberal advocates argue it is just modeling the federal law that has been in existence for years. But conservatives are critical of the cash give-away that is intended to redistribute wealth.

Just two years ago, the same idea was proposed by Democrats but the bill only received 28 votes out of the 100 members of the Arkansas House of Representatives.[i] Only 4 Republicans voted for it. The legislature opted instead to pass legislation to give tax relief by lowering the income tax rate on low-income and middle-income earners.[ii]

Based on a history of Arkansas conservatives opposing the idea and the sound defeat of legislation, it was surprising to see the Senate leader, Senator Jim Hendren (R- Gravette), sponsor the income redistribution legislation this year. Hendren who is the nephew of Governor Asa Hutchinson is joined on the bill by other Republican legislators and obviously by Democrats.

Why are some Republicans supporting liberal legislation soundly rejected two years ago?  It has the smell of a political payback to the Democrats for supporting other legislation.  Perhaps it is the price Democrats demanded from tax and spend Republicans for supporting the Governor’s road program and voting to increase the tax on gasoline and diesel fuel and proposing a new ½ % sales tax beginning in 2023.

Support for the legislation may be political payback, but they are paying with our money.

Supporters of the income redistribution bill will tell you, “Don’t worry. The money is coming from increased taxes on tobacco products and e-cigarettes.” They think it won’t matter to you unless you are a smoker.

It should matter to all of us! No matter which tax is used for income redistribution …. it is OUR MONEY and it is TAXES ON US.