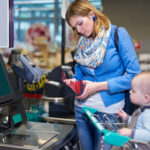 Why is liberal Democrat-Gazette columnist John Brummett spending so much time defending Governor Asa Hutchinson? Maybe because, as a liberal he likes Asa’s big government policies and Asa thwarting legislation by social conservatives.

And, why would a liberal defend raising the tax on groceries?  Because it will “broaden the tax base” which means more money to grow government.

Brummett’s article: “Talk on taxes, minus spin”[i] has more spin than a laundromat at the end of a long weekend.

Make sure you read the bottom of the article showing how few states fully tax groceries and and that in most states groceries are fully exempt from taxes.

His Spin for Asa

Brummett claims raising the grocery tax with an income tax credit for low-income people is a great idea.  But in case your are not convinced and are still mad about grocery tax discussions, Brummett doesn’t want you to blame Governor Hutchinson.

He tries to minimize Asa’s involvement in the task force by saying: “It is true that he supported establishing a legislative tax force..” No, the Governor didn’t just “support” creation of the task force.  The tax task force is the Governor’s brain child – his baby.

From the beginning Asa’s task force idea was a switcheroo. The Democrat-Gazette reported the idea came about to placate some Republican legislators who wanted to propose more tax relief in 2007.[iv]  (Let’s study it – punt it down the road two years.) The only thing the legislators who wanted more tax cuts got was a task force that included the word “relief” in its name, while the mission of the task force, set by the Governor, doesn’t include anything about giving tax relief from Arkansas’ already high taxes.

His Spin for higher grocery taxes

In claiming that raising your grocery taxes is a great idea, Brummett cites a 2007 idea by Democrat Benny Petrus, when he was Speaker of the House of Representatives. “Rather than generally drawing down the sales tax on groceries for everybody, he proposed that we deliver targeted income-tax cuts only to low-income people.”

Don’t be fooled.  When big government advocates talk about raising grocery tax and giving low-income tax people a tax credit, it is NOT about helping low income people.  It is about broadening the tax base to get MORE money of your money to grow government.

John Brummett and Governor Asa Hutchinson are out of touch with what people in Arkansas and around the country think about grocery taxes. Grocery taxes are despised.

Most states completely exempt groceries from both state and local sales tax.

Take a look at how poorly Arkansas compares with the rest of the nation. 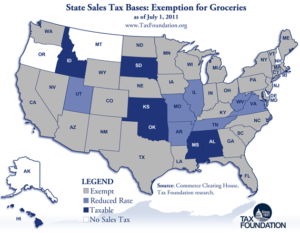