Earlier this year a Wall Street Journal (WSJ) editorial bragged on Arkansas and our Governor Asa Hutchinson for tax reforms during the Governor’s terms of office. It is a great thing when Arkansas gets some positive press! We get so little.

And that is what makes debunking this supposed good news so unpleasant.

What the WSJ editorial said amounts to a half truth. It reports on the passage of laws lowering parts of the Arkansas income tax without acknowledging that in doing so the Governor and legislature raised other taxes. 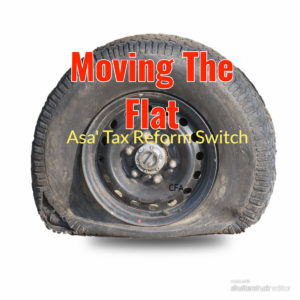 The WSJ bragging on Arkansas for lowering one tax while failing to mention Arkansas tax increases is comparable to bragging that your front tire is no longer flat and not mentioning you only moved the flat tire from the front to the back.

Why did the WSJ report on Arkansas tax reductions but ignore Arkansas tax increases? The editorial reads like campaign bullet points. It makes you wonder was the WSJ so sloppy it just took campaign spin provided to them without ever taking an impartial look into whether the real tax burden in Arkansas was changing?

The article begins, “Democrats around the country want to raise taxes, but Arkansas has a better idea. As Gov. Asa Hutchinson begins his second term, he and the GOP Legislature are moving to make the state more economically competitive with an ambitious tax reform.”

The article then cites Arkansas tax reductions…. which would be wonderful if it wasn’t for the tax increases the WSJ failed to mention. Here is the part they talked about.

Gosh that sounds great and we wish the real story stopped there before the tax increases the Governor wanted. Basically, the talking points given to the WSJ amounted to a lie by omission because it omitted any mention of the times the Governor got tax increases passed.

FIRST, lets start in 2015. The middle class income tax reduction (Act 22 of 2015) wasn’t a freebee for Arkansas taxpayers as you might think from reading the article.  Governor Hutchinson gave but he also took back. Hutchison took back capital gains tax reform that businesses and the Republican majority had fought hard to pass in 2013 despite there being a Democrat Governor. The lower rates had been in effect for about a month when the Governor insisted the tax relief be taken back to help fund his middle class income tax reduction.  The legislature passed the Governor’s plan, but a few Republican legislators and many business people were so upset with the betrayal they kept up the pressure the entire session.  Eventually, Hutchinson acquiesced to giving back half of the capital gains relief and delaying the implementation of the other half for a year. The deal wasn’t the permanent tax swap the Governor wanted, but he got to hang on to millions.

The capital gains betrayal of 2015 showed the pattern the Governor would use in the upcoming years, with Hutchinson taking credit for more tax relief while relying heavily on shifting Arkansas’ heavy tax burden to other taxes.

SECOND, let’s look at 2017. The tax cut for low income taxpayers was passed by Act 78 of 2017 but the tax changes didn’t stop there. Also, on the plus side but not mentioned in the article was income tax relief for a small segment of Arkansans. Military retirement pay was exempted from taxation.[i] But on the negative side, the Governor insisted on increasing or imposing new taxes elsewhere to help offset tax reductions, including:

THIRD, that brings us to this year. At the Governor’s urging the legislature passed an income tax for the highest earners—households with an income of $80,500. With this legislation Governor Asa Hutchinson bragged he had cut income taxes for low income, middle income, and high-income earners. As with the previous years, this news would be great if it wasn’t for the taxes he insisted on increasing. Let’s take a closer look at the tax changes in 2019. It is a picture that cannot be bragged on because it increased the tax burden on Arkansans.

*Those in parenthesis are decreases. Revenue numbers are from the Arkansas State Government (DFA, Dept of Health)

The tax picture for Arkansans may get even worse because this year the legislature passed HJR1018 which will put on your 2020 ballot a 0.5% sales tax for roads and highways to be imposed once an existing tax of specific highway projects expires.

FOURTH, let’s give credit where credit is due.  That grocery tax reduction mentioned in the article had nothing to do with Governor Asa Hutchinson other than he stayed out of the way and didn’t screw it up.  The reduction was due to a trigger in legislation passed before Hutchinson came along and was in fact a provision pushed by former Governor Mike Beebe, despite him being a dadgum Democrat.

To read the WSJ article you would normally need a subscription, but the Governor’s Arkansas Economic Development Commission has posted it. (See reposted article) Displayed on a government website it is political spin.

Why Expose the Deception

In this article, we have tried to cut through the political spin being fed to you while they state is picking your pocket.  In addressing the deception, we want politicians to realize they must be honest with you.

We hope Arkansas’ high tax burden will one day be lowered – getting an honest discussion with politicians is a necessary starting place!

[iii] For Fiscal Year 2024 and 2029 assumes the half percent sales tax passes as supported and approved for ballot access by the Arkansas General Assembly.