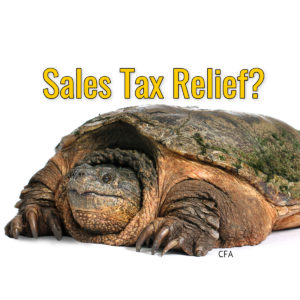 Before we explain why Jett is wrong about how much control the legislature has over sales taxes, here are a couple of things you need to know about the lack of pruning.

Jett Wrong About Lack Of Control

Rep. Joe Jett, R-Success, who is chairman of the House Revenue and Taxation Committee, said in an interview last week that “we [the state legislature] can control 4.5% of the 6.5%” of the state’s sales-tax rate. He noted that a 0.875% sales tax is for funding a constitutionally mandated adequate education for public schools; and constitutional amendments resulted in a rate of 0.125% for conservation, a rate of 0.5% for the homestead property tax credit, and a rate of 0.5% for highways and roads.

Jett’s long tenure as Chair of the House Revenue and Taxation Committee makes this statement all the more perplexing. He has been chair for four and one half years (first as a Democrat and then as a Republican) but he still claims limited responsibility.

Let’s look at each sales tax Jett claims the legislature has no control over.

We also note although we are tied with Tennessee, Tennessee does not have an income tax on wages.

Just as importantly, the legislature could end the practice of local governments using special elections to pass tax increases. Many local governments do this because they know it is easier to increase taxes when voter turnout is low.

In 2017 the legislature failed to pass SB723 which would have ended the practice of having special elections to pass local sales taxes. The bill passed the Senate and was only one vote short in the House. Representative Justin Gonzales filed a similar bill this year but it went nowhere.[ii]

Internet Sales Tax. A majority of the legislature also decided this year to collect more sales tax FROM YOU by imposing the Internet Sales Tax which makes YOU pay sales tax even if you use the internet to make a purchase from a seller who has no connection to Arkansas other than shipping the goods to Arkansas. Jett didn’t vote.

There is an old folk tale that says if a snapping turtle bites you it won’t let go until it thunders.

Tax and spend politicians are like snapping turtles. They aren’t going to let go of any sales taxes unless you THUNDER!