Governor Asa Hutchinson wants to increase highway funding by hundreds of millions of dollars. Part of his proposal would add a new wholesale tax on gasoline and diesel fuel. This would be in addition to the current state and federal taxes on motor fuel. 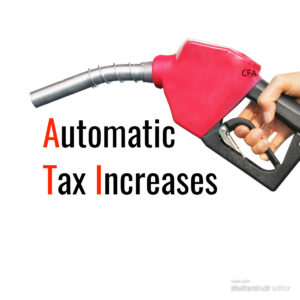 If the sheer size of the tax increase is not enough to scare you, then you need to hear about the new aspect he wants to include.  The tax rate would grow.

He says the tax would be “indexed” meaning it includes a mechanism to allow the tax rate to continue to increase.  His plan allows future automatic tax increases of up to 0.10 of a cent a year. This means the tax rate could increase up to 1¢ in each ten-year period – without there ever being another vote on the tax.

Not only do tax-and-spend politicians want to increase the cost at the pump, they want a tax rate that grows over time.

Tax-and-spend politicians like the idea of indexing when it would take more money out of your pocket, but not when indexing would let you keep some of your money. The Arkansas income tax is a great example of where indexing would help taxpayers, but politicians don’t want to do it. The Arkansas income tax law is full of dollar amounts for tax brackets, deductions, and exemptions. Because they are not adjusted for inflation, the benefits to taxpayers go down year after year.  Lets look at some examples from the income tax law:

If politicians are not going to use indexing when it would keep taxpayers from losing ground, why would we want them to use indexing to impose automatic tax increases on motor fuel?

Does your Senator and Representative think it is a good idea to automatically increase your fuel tax? Find out!

[i] The $6,000 amount was referenced in a 1987 law and appears to have been in existence prior to that. In addition teachers retirement pay used to be fully exempt but was dropped down to the $6,000 amount in 1989.