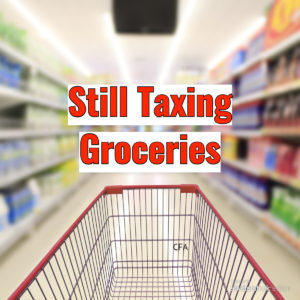 There is still some state sales tax collected on groceries but no politician has stepped forward to remove the remaining tax. In addition, there is no tax exemption for groceries under city and county sales taxes. Most of the sales tax you pay on groceries is due to local taxes. When your city or county levies a new sales tax it automatically includes groceries.

Do you think the tax on groceries should be eliminated? If so, the next question is: How to go about it? Trying to eliminate it at once is a tall order and you would be fighting nearly every city and county in the state, because they would lose revenue. Some state officials would also oppose a cut in the grocery tax, because of the state’s small share. With state and local officials lined up against you, eliminating the grocery taxes all at once looks like a political loser.

So, can it be done politically?  I would suggest the same tactic as used by former Governor Beebe –chipping away at the tax bit by bit. Even that is a big political hurdle.

To chip away at the tax, I would suggest three separate pieces of legislation. Each one is difficult enough without combining them into one bill.

Even with these three steps some cities and counties might opt to keep local taxes on groceries for years to come, but at least that decision would be up to the people of the city or county.

Would Governor Asa Hutchinson support these or other measures to cut grocery taxes?  When he ran for governor and lost to Mike Beebe, Hutchinson said he wanted to eliminate all tax on groceries. Yet after nearly five years of being governor, there has been no move to further reduce the tax beyond the changes triggered by laws passed during the Beebe administration. Hutchinson’s focus has been on other taxes, reducing some and increasing some.

In 2017, at Governor Hutchinson’s urging, the legislature carved out candy and soda from the list of grocery items entitled to a reduced rate and subjected them to the full tax. In 2018, a legislative task force decided to explore the possibility of imposing the full sales tax on groceries. The Governor didn’t speak against the option until all other candidates for governor (Republican, Democrat, and Libertarian) had taken a position against raising the tax on groceries.

There is still much debate on whether groceries should be taxed.  Some say the tax on groceries is regressive and has the most impact on low income Arkansans who live paycheck to paycheck. Others say broadening the base of taxes by eliminating exceptions (such as the reduced tax rate on groceries) is good policy and creates a broader tax base that protects against a drop in tax revenue in an economic down turn.

What do you think about the grocery tax? Should politicians continue to work on reducing the tax until it is eventually gone.  Or, should groceries be taxed at the higher rate. I think I know your answer.

If you want to get rid of grocery taxes you need to start now by letting your legislators know your opinion.  And, if you are serious about eliminating the grocery tax you should push candidates in 2020 for a clear statement of their position.