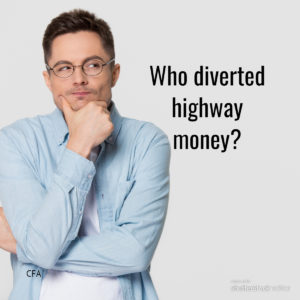 Last year the Arkansas Highway Commission gave away $1 Million in highway money to the University of Arkansas to help fund an engineering building. The grant of your money came at the same time the Highway Commission and the Department of Transportation were crying they needed more tax money from you to maintain and improve roads. It was callous to be begging for more of your money while giving away highway money at the same time.[i]

Some legislators blew off the diversion saying the legislature doesn’t have any control of the Highway Commission and Department of Transportation, which is clearly not true.[ii]

Conduit For Action wondered how the diversion was possible since highway funds are levied and collected for highway and road needs.  A Freedom of Information request asked DOT for details of the transfer. What we learned surprised us.

Documents provided by the Department of Transportation cite the authority for the grant of $1 million to the University of Arkansas as Act 705 of 2017. Among other things, the act created a new fund called the Future Transportation Research Fund and diverted $500,000 per year of interest from highway revenues to use for grants to colleges. (See attached)

Why divert money from highways to fund the UA building instead of funding it directly from General Revenues?  Because the Governor pretends he is controlling spending by limiting the increase of General Revenues.  To carry out this deception he shifts spending to other funds like the highway funds.  IT IS ANOTHER SPENDING DECEPTION.

The lead sponsor of the Senate bill was Senator Jake Files who also sponsored the Governor’s 2017 attempt to make you pay an internet sales tax.  Unrelated to this legislation, Files resigned and pled guilty to felonies for fraud and money laundering related to taking state money for his own benefit.[iii]

The House cosponsor was Representative Andy Davis.  Davis announced he will not be running for reelection.[iv]

How do you like the sneaky way your Arkansas government operates?  Think about this as the tax on gasoline and diesel fuel is increased. Think about it when a ½ percent sales tax for highways is proposed on your 2020 ballot.

[i] https://conduitforaction.org/incredibly-bad-timing/
[ii] https://conduitforaction.org/we-cant-do-anything-oh-yeah/
[iii] https://www.arkansasonline.com/news/2018/aug/04/1-year-sentence-starting-files/
[iv] https://www.arkansasonline.com/news/2019/sep/13/2-more-house-hopefuls-in-line-20190913/
[v] SECTION 13. APPROPRIATION – TRANSPORTATION RELATED RESEARCH GRANTS.  There is hereby appropriated, to the Arkansas Department of Transportation, to be payable from the Future Transportation Research Fund, for grants to publicly funded institutions of higher education for transportation related research, by the Arkansas Department of Transportation, for the fiscal year ending June 30, 2020, the following:
ITEM FISCAL YEAR 1 NO. 2019-2020
(01) TRANSPORTATION RELATED RESEARCH GRANT $1,500,000