You will want to read this summary even if you are wishy-washy on the Second Amendment. Why? Because Governor Asa Hutchinson’s actions concerning the Second Amendment illustrates how he tries to finesse every issue instead of owning up to his actual position.

If you were Rip Van Winkle and just woke up to hear Governor Hutchinson talking about gun rights, you would think he was a great supporter.  The governor hopes you too have been sleeping and have only heard his posturing.

Opposed campus carry. In 2017 a bill was filed to allow college faculty and staff to protect themselves and their students by carry concealed handguns on campus if they had a concealed carry license.  Asa didn’t want the change saying the existing law was sufficient. But the existing law prohibited the faculty and staff from having a handgun on campus unless the college administration allowed it. Not a single Arkansas college administration had allowed faculty or staff to do this, since colleges are strongholds of liberal thinking. This is what Asa thought was sufficient.  Here is a statement on his behalf in the Democrat-Gazette:

J.R. Davis, a spokesman for Gov. Asa Hutchinson, said the “governor has said that his inclination is that the status quo seems to be working and that it should be up to the university to set that policy, but he hasn’t had a chance to review the bill itself.”[i]

Nephew in Action. The campus carry bill passed the House of Representatives and went to the Senate Committee chaired by Asa’s nephew, Senator Jeremy Hutchinson. Senator Hutchinson tried to kill the bill.  His next maneuver was to amend the bill to add pages of restrictions to make sure few would ever get “permission” to carry on campus. 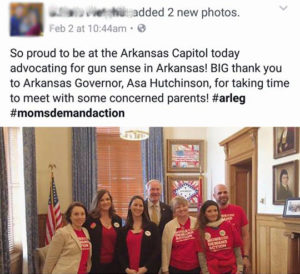 No meeting for 2A supporters. Arkansas supporters of the Second Amendment requested to also have an audience with the Governor, but he refused while debate was ongoing.

Lipstick on the pig. As Second Amendment supporters turned out for Senate committee hearings, Senator Hutchinson abruptly canceled meetings.  Yet, the Second Amendment defenders kept coming back. This forced the gun control sympathizers to put lipstick on the pig by adding more places a person could carry if they went through all the extra requirements and complied with all the restrictions. They even gave the restrictive plan a spiffy new name “enhanced carry.”

More restrictions. Before the ink was dry on the new law, Asa wanted another bill to be written and passed to add more restrictions to the “enhanced carry” law. The legislature quickly complied with his wish and the NRA cried betrayal. 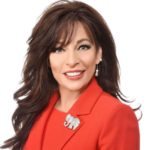 Enter Jan Morgan candidate. Jan Morgan began exploring the possibility of challenging Asa for election as Governor. Morgan’s advocacy for Second Amendment rights made her a highly sought-after speaker around the country and she appeared as a regular commentator on Fox Business News concerning the Second Amendment and other political issues. Morgan had worked to try to stop the restrictions included in the so-called enhanced carry bill. She is also the owner of the Gun Cave Indoor Firing Range in Hot Springs. 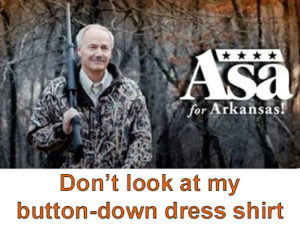 Hunter photo. Asa decided to build an image of himself as a Second Amendment supporter.  He began with the picture to the right. Why do so many politicians dress up like a hunter to say they support the Second Amendment? (Hunting is a highly regulated PRIVILEGE. The Second Amendment is a RIGHT.) In this picture he wants to show he is a serious hunter …. by wearing a button-down dress shirt with his camo.

Big Announcement Fizzle. Asa then made a big announcement, telling the Arkansas State Police it is legal for citizens to openly carry handguns. Well welcome to the party very late. In 2013 the legislature passed a law saying you weren’t in violation of the law on carrying a weapon unless it was shown you were carrying with the intent to use it UNLAWFULLY against another person. And, in 2015 open carry was recognized in an opinion by the Attorney General.  Yet it took two more years and a primary election opponent for Asa to make the “big announcement.” 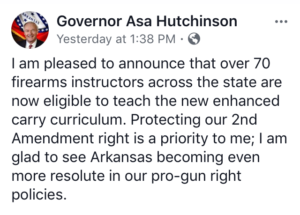 Positive Announcement was actually bad news. In January Asa made what he thought was a big announcement that 70 trainers were approved to provide lessons for enhanced carry. Under his law those who want to be licensed to train people for a concealed carry license must also teach a course for the enhanced carry license each time. While Asa was bragging on the number of trainers, Second Amendment supporters were upset by the low numbers because it was only a very small fraction of the number of trainers who had been licensed to teach the regular concealed carry class in the previous year. Many trainers got out of the business instead of going through the expense and hassle of teaching the enhanced carry class to the limited number of people who would want the course. At this date, the number of licensed trainers is still only a fraction of those who taught before Asa’s law. 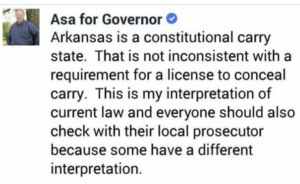 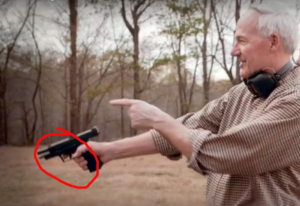 Handgun photo fail. At long last Asa realized the Second Amendment supporters were making fun of politicians who were dressing up like Elmer Fudd to supposedly show support for gun rights. So Asa had his picture taken with a handgun.

But Asa was on a roll, since it was another nice picture wearing a button down shirt and holding a firearm.

Ratings.  Despite Asa being the sitting Governor the NRA gave Asa an “A-” rating and Jan Morgan an “A.” It appears to us the NRA gave him that high of a rating because the NRA was in a bind from betraying Arkansas gun owners when it acquiesced to the enhanced carry bill. The NRA then screamed betrayal when Asa added even more restrictions.
The Arkansas Second Amendment advocacy group, Patriots of Act 746, with over 13,000 members gave Asa a “C” rating while it gave Jan Morgan an “A”.

Asa’s support of Second Amendment issues only comes after kicking and dragging his feet.