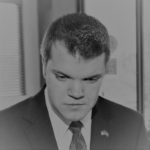 Rep. James Sturch was interviewed by a Jonesboro Sun reporter and asked to explain his actions on two bills.  It was no surprise he would be asked about these bills. Yet, his answer on the first bill conflicts with his answer on the second bill. It was one of those moments where you wish you could see the reporter’s face as the reporter heard the response.

One bill had to do with handguns.  The other bill was about election reform.

The issue on handguns is one where Senator Linda Collins-Smith and Rep. Sturch clearly disagree on the so-called “enhanced carry” bill.

Senator Collins-Smith had supported the bill when it was “campus carry” which would have allowed college staff with a concealed handgun license to carry on campus. But when it was amended in a way that created a burdensome regulatory nightmare, she opposed the bill. Arkansas handgun owners turned out to support Senator Collins-Smith in opposing what had become the so called “enhanced carry” bill. The issue so upset handgun owners that the 2nd Amendment group Patriots of Act 746 saw its membership double when it fought this bill and now has over 13,000 members.

Sturch said, unlike Collins-Smith, he won’t oppose a bill because it isn’t perfect. “We’re never going to get a perfect bill because there are no perfect legislators,” Sturch said.”[i]

Keep Sturch’s statement in mind as you consider the next bill where he walked out to keep his vote from counting.

Senator Collins-Smith voted for an election reform bill to keep cities and counties from using special elections to pass tax increases. Research showed when there is low voter turnout, tax increases are more likely to pass and that is why local governments use special elections. The Senate passed the bill and it went to Rep. Sturch’s committee in the House of Representatives.

In the house committee amendments were added at the request of the Association of Counties. The first amendment said a special election could still be used if there was a real emergency.  The second delayed the implementation of the bill until the counties were fully funded to provide changes in election machines.

Sturch’s third opportunity came when the bill came for final vote in the House. Sturch voted “Yes” on the bill and it passed by two votes, but the vote was challenged. The challenge meant the yes votes had to be in their seats and affirm their vote.  One Representative who had been voted “yes” was not there.  That meant it would pass by only one vote.  With seconds to go before his name would be called, Sturch looked at his cell phone and walked out. His name was called and he was not there. This invalidated his vote and killed the election reform bill.

Sturch explains his bizarre actions by saying he asked his seatmate why he voted against the bill and his seatmate told him the bill wouldn’t become effective until money was found to assist counties with their election machinery. Sturch said in the few seconds remaining:

“Realizing that reducing the number of special elections, a savings of about $200,000, would cost the state $30 million for new equipment, Sturch said he decided to get up and leave his seat…”

Sturch’s explanation on walking out makes no sense. It is clear the explanation was constructed long after the vote and not on what actually caused him to walk out. If you are going to be the kind of politician who makes up stuff, you would think a year would enable you to come up with something better than this nonsense.

Sorry, but it looks like a very poor lie.

First, Sturch claims that in a matter of seconds after his initial vote he realized election reform would cost more money than it saves and that is why he walked out. Nope! Makes no sense.

Second, on the highly restrictive “enhanced carry” bill, Sturch proclaimed, I “won’t oppose a bill because it isn’t perfect.” When you leave out the bogus cost issue he now raises the only thing he has left is to say is the bill wasn’t perfect because it would not be immediately implemented. Maybe the School Choice wasn’t perfect enough for him either, since he also flip-flopped on that issue too – voting “For” School Choice in committee but a couple of days later when the same bill reached the House floor he spoke against it and voted “NO” on School Choice.

The truth is once one vote was struck because another representative was not present, he realized (in a few seconds) he would be the deciding vote.  Perhaps he realized he could kill the bill when he looked down at his phone and got a message from someone who wanted municipalities to pass tax increases in a special election when few people would turn out.

To be fair, we do not know if he got a text message on his phone or whether he was just using his phone as an excuse to pretend he got an important phone call. But isn’t it interesting that Sturch’s Statement of Financial Interest filed in 2015 and 2016 showed he was working for a lobbyist. (No job reported in 2017.)  Isn’t it also interesting that the same lobbyist was lobbying on behalf of the Arkansas Municipal League to kill the bill.[ii]

Mr Sturch is this the best you can do on making up excuses? Or do you blame the unworkable excuse on your handlers?