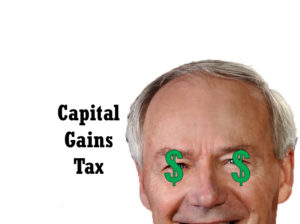 Senate Bill 6 of 2015 was filed as a middle-class tax relief bill.[i] As filed, the bill was only about reducing taxes. Then Governor Hutchinson had a friendly amendment added to add a new section to increase the capital gains tax. Capital gains relief had been passed by the Republican majority legislature in 2013 but Hutchinson wanted to take it all back.

Taking back all the capital gains tax relief passed in 2013 was estimated to give Asa over $20 million in additional taxes each year.[iii] Under the 2013 law, 50% of capital gains would be exempt but the new section would have moved it back down to 30%.

Republicans in the House of Representatives didn’t want to betray their 2013 promise but they didn’t want to go against their new Governor. The House split the difference by giving Hutchinson half of the increase, setting the exemption at 40%. Governor Hutchinson signed the bill into law.

Because the increase was still an embarrassment and betrayal, House Bill 1402 was filed to try to restore the capital gains tax relief to 50% from the 40% just signed by the Governor.

DFA estimated the restoration of the capital gains tax relief would cost $10.8M in 2016 and $11.8M in 2017.[iv] Legislators could not get the capital gains tax treatment fully restored but were able to get part of it back by setting the exemption at 45%. The 5% change was estimated to reduce state revenue by $6 million in 2016 and $11.8 million in 2017. One of the DFA estimates for 2017 appears to be in error because both estimates use the same number despite a change in the percentage.

Asa’s strategy worked so well in 2015, he used it again in 2017 in a bill to give a tax break for military retirement pay. Asa insisted on passing HB1162 which included tax increases on digital downloads, unemployment compensation, soft drinks, and candy. Legislators who refused to vote for tax increases have been accused of being against veterans. This is how your Governor rolls.

In 2015, Governor Hutchinson went on his merry way bragging on his middle-income tax cut – never mentioning his $5 million a year increase on taxpayers who sell property.  In 2017, he continued his propaganda bragging on the military retirement pay exemption as something he did for veterans (only a small percentage of veterans get military retirement pay) and never mentioning the list of tax increases he insisted be a part of the bill. Again, this is how your Governor rolls.