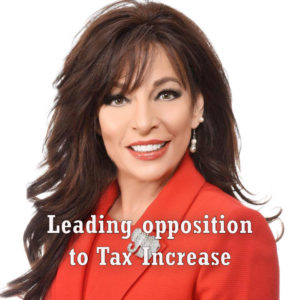 Morgan has been joined in her opposition to a grocery tax increase by all the other candidates in the race other than Governor Hutchinson.[i] The two Democrat candidates are Jared Hendren and Leticia Sanders and the Libertarian candidate is Mark West.

Governor Asa Hutchinson is the ONLY candidate in the race for governor who refuses to say, “I will not raise the grocery tax.”

Instead Governor Hutchinson is trying to finesse his way around the issue with:

Governor Hutchinson now says he has been a consistent supporter of eliminating the sales tax on groceries. Consistent supporter?! He is not a cheerleader waving pompoms from the sidelines. He is the freakin governor! And, he has not even tried to get in the game.

Asa is like a person who sees a man drowning but does nothing, other than holler “I support you being rescued.”  We are drowning in taxes and Asa has done nothing to eliminate the grocery tax as he once promised.

Asa has not been shy about trying to get a gasoline and diesel tax increase on the ballot, but not a peep about getting a ballot issue to remove groceries from the 1/8th cent sales tax.

After three years of doing nothing, do you still believe Asa is a supporter of eliminating the grocery tax?  Even if he changed his tune at this late date, who would believe him. Remember his 2006 campaign pledge to immediately eliminate the grocery tax? Remember his 2014 promise not to increase taxes during his term and then breaking that promise time and time again.

Asa criticized the other candidates saying they “are afraid of legislative review and debate.” He is referring to the tax task force putting a grocery tax increase high on its list and him failing to oppose the move. Don’t forget, this is the task force he proposed under his guidelines and with the chairman being his nephew, Senator Jim Hendren.

Interesting, Asa is for debate when it is “legislative debate” that may result in a higher grocery tax, but he is not for a debate with Jan Morgan.

Asa’s hiding behind “legislative debate” is reminiscent of a legislator who voted to put an issue on the ballot and when it turned out to be a stinker said, “Oh, don’t blame me. I didn’t vote “FOR” the issue.  I only voted to let the people have a chance to decide.”  And who has ever bought that line? No one ever!

Jan Morgan is fighting hard to stop Asa in the Republican primary. If she wins the effort to raise your grocery tax will be dead. Her efforts are being noticed. Other than Asa, all the candidates in the Governor’s race agree with Morgan – increasing the grocery tax is bad for Arkansas.

Jan Morgan is more in touch with Republican voters and the people of Arkansas than Governor Hutchinson. Or maybe he just doesn’t care. Asa is surrounded by people who say, “Yes, Governor, you can finesse your way through the primary and general elections, and then with a four-year term …. you can raise grocery taxes and grow government.”

What do you think about increasing the grocery tax? Whether you are for or against GO VOTE! There is a candidate who represents you.

The party primary elections are May 22
and early voting begins May 7.