Every year many Arkansans go into debt because of Christmas spending.  There can be lots of expenses that come with celebrating the holiday – gifts for others, decorations to brighten your home, lots of food and desserts for family gatherings, and travel expenses. Some scrimp and save and go without during the year yet still end up in debt at the end of the year. It would be better not to go in debt, but we get it – it is a celebration.

Have you ever thought about how the taxman horns in on your Christmas?

Everything you buy is taxed at a high rate.  Worse, every time you put Christmas on a credit card to pay off over time, part of what you are financing is state and local taxes.  Next year when you are still paying the credit card company and it seems like the balance hardly goes down, think about the interest you are paying just on Arkansas taxes. 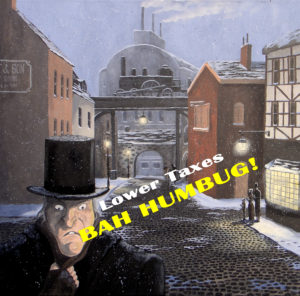 WE NEED LESS TAX IN OUR CHRISTMAS! WE NEED THE GOVERNMENT TO QUIT ACTING ALL YEAR LIKE IT IS CHRISTMAS FOR THEM AS THEY SPEND OUR MONEY!

What You Buy. Arkansas has one of the highest sales taxes in the nation. Some states don’t even have a state sales tax. Yet our high tax wasn’t enough for tax-and-spend politicians, so this year they imposed an internet sales tax so when you buy a present you can’t find locally and have to buy it online from an out-of-state seller, Arkansas makes sure you pay an internet sales tax.

Traveling For Christmas. Arkansas’ gasoline and diesel taxes were high for this region. but that wasn’t enough for politicians. so this year they increased the tax even more.

The Income You Spend On Christmas.  That nice salary you work hard to earn doesn’t go as far as you hoped because there is a list of state and federal taxes that get taken out before you get a dime.  Just think – people in Tennessee and Texas aren’t paying a state income tax on their salaries.

Taking More More More. To help you get INTO DEBT before you even start spending money on Christmas, this year Arkansas also increased taxes on cell phones, water bills, and tobacco products. And, in 2017 Arkansas decided to enhance your Christmas by raising the tax on candy, soft drinks, digital downloads (such as the Christmas movie you rent to watch with friends), and if you are unlucky enough to be unemployed, they made your unemployment compensation subject to the Arkansas income tax.

Talking Tax Cuts. Some politicians are bragging on an income tax cut for high income earners and a $25 homestead property tax credit, while purposely not mentioning the taxes they have raised every time they get a chance and they won’t mention they raided the fund from which future homestead property tax relief is funded.

Asa’s Christmas List For 2020.  Governor Asa Hutchinson likes to spend your money so much he has made passing a permanent one-half percent (0.50%) sales tax next November his top priority.  If you pass, it will keep you from getting promised tax relief in 2013.  And may all your Christmases be … taxed.

Scrooge. The high tax burden in Arkansas is a lot like working for Ebenezer Scrooge.  Yet no matter how much Arkansas politicians take away from us, Arkansans are resolved to be like Bob Cratchit and have a celebration with what we have.

The Christmas spirits who reformed Scrooge’s heart would have a much more difficult job changing our tax-and-spend politicians.