Having worked for the Arkansas General Assembly for nearly thirty-two years I have a lot of respect for the legislative process, the legislators I worked with, legislative staff, and the people who go to the state Capitol to express their opinions. In particular, this morning I am thinking about the drastic changes in the House of Representatives which give the Speaker of the House huge power.

The Speaker of the House has always been a powerful officer. The Speaker was powerful, even though the position was largely an honor based on seniority, even in the 1980’s and most of the 1990’s. The Speaker had few appointments, primarily to the powerful Rules committee and the House Management Committee and to some other positions.

With only a few Representatives owing allegiance to the Speaker, power was distributed among the committee chairs who obtained their positions based on seniority.  This meant the House was much harder to control by one person or group.

Once in the 1990’s, freshmen joined by others were able to pull a coup and block all budget bills until they got a seat at the table to decide how the budget would be made.  That couldn’t happen under the current power structure. 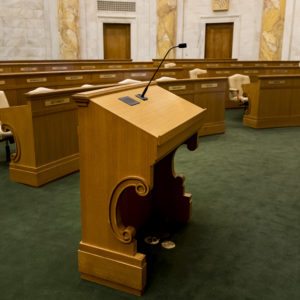 Photo from House of Representatives

Often the House was referred to as a body of 100 equals. I liked that notion because my role as a legislative employee was to give equal assistance to every legislator – the powerful and the least powerful.

Some of my counterparts in legislatures in other states, were envious of how the Arkansas legislature worked, because in their own states they worked under heavy handed restrictions of a powerful Speaker or committee chair.  A staffer in one state (can’t remember which state) told me he could not even draft a bill for a legislator unless the proposed bill was first approved by leadership. Ugh!

With the House rules changes over the last several years, you can’t call the House a body of 100 equals anymore. It is a body made up of a Speaker and 99 legislators who owe favors to the Speaker.

The first change in the 1990’s was to give the Speaker the power to appoint all committee chairs, vice chairs, and subcommittee chairs. This rules change gave the Speaker more appointments to pass out than there were Representatives.  Two excuses were used for this move.  First, was the existence of short term-limits.  It was said seniority was no longer a good system because a person could only serve three two-year terms. (Now they can serve sixteen years.) Second, the House was overwhelmingly Democrat but Governor Mike Huckabee was Republican, and this division of power between the parties was used as an excuse to say you need a strong Speaker to fight for the legislature against governors.  In reality, House speakers and governors have been strong allies and this relationship has served to help governors overcome dissent in the House. For example, it was House Speaker Davy Carter who called an unprecedented number of votes to eventually get approval for funding of Governor Mike Beebe’s version of Obamacare Medicaid expansion.

Eventually, Speaker of the House Jeremy Gillum proposed giving the Speaker the power to to appoint every membership of every House committee instead of letting Representatives pick. I knew the change would pass, they couldn’t buck the Speaker because the Speaker already had so many Representatives who owed him allegiance for appointments to leadership positions.  Speaker Matthew Shepherd will be the first speaker to have the power to make all committee assignments.

Imagine you are a lobbyist for a large Medicaid provider and there have been rumblings that some legislators plan to pass restrictions on your industry.  How do you fight it? The first step is to work with the Speaker to make sure the House Committee Public Health, Welfare, & Labor is stacked with your friends.

Or imagine you are the governor and want to get a gas tax passed. You would work with the speaker to make sure the committee membership is such that it will rubber stamp the proposal and send it to the House floor, and secondly you would get the Speaker to put pressure on his many appointees to vote “the right way.”

I read with interest some text messages in a court document in the trial of Senator Jon Woods.  It appears to be the reflections of Representative Micah Neal, also convicted, as passed on to the FBI by his attorney. The message is from Neal’s attorney to a special agent on January 13, 2017:

With the new rules the House passed this week,, you will see future Speakers of the House go down in corruption charges… they placed all committee placement totally in the hands of the Speaker…

I find it interesting the first thought of a legislator caught in corruption was that the new power given to Speakers would be a corruption trap.

Big lobbyists have always paid a lot of attention to whoever was in line to be speaker.  Now, especially with the Speaker being so powerful, big lobbyists would be stupid not to focus tremendous resources to get the speaker they want.

I like most of the lobbyists I knew but am mindful there will be others like Rusty Cranford who use bribery as a political tool.

I have no reason to think Speaker Matthew Shepherd will do anything other than serve without blemish. But if ANY Representative comes under suspicion of corruption, whoever is speaker will be investigated because of the appointments and assignments made by the Speaker. Perhaps that is a small price to pay for so much power.

I don’t see a way back to the notion of 100 equals in the Arkansas House of Representatives. The system has changed forever… barring some huge scandal in the future.

Beatles – In My Life