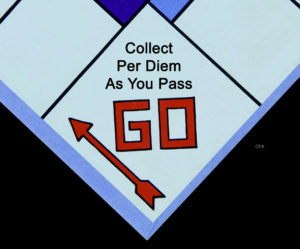 The legislature uses the federal per diem rates. The federal rate for Little Rock dropped slightly from last year to this year. The rates are now $94 for lodging and $55 for meals and incidentals. That is $149 just for dropping by any ole legislative committee meeting before leaving town.[i] NO RECEIPTS NECESSARY AND UNDER FEDERAL LAW LEGISLATIVE EXPENSES ARE NOT TAXABLE!

Why are they paid for signing into a committee when they are not a member of the committee?  According to David Ferguson[ii]:

The legislature’s policy of paying non-committee members didn’t come about until after 1992.  Before then, a legislator either had to be a member of the committee or the committee chair had to approve payment because the non-member legislator was presenting a study request to the committee.

With the 1992 term limits causing a third of the House of Representatives to be new members every two years, it was argued legislators needed to be educated more quickly, and therefore to encourage them to attend meetings of many committees, the legislature adopted the “Y’all Come and Be Paid” policy, which means any legislator who shows up gets paid for being at the committee meeting.

The education argument went away in 2014 when term limits were weakened with a 16-year term limit.  Big turn overs in the legislature are a thing of the past, but no one considered ending the “Y’all Come and be Paid” policy.[iii]

Instead of paying tons of money to non-committee members to come and gawk, the gawkers could get the same education and information for a lot less money. How? By the legislature providing live video streaming and recording of all legislative meetings held in Little Rock.

If the goal is to educate legislators and is not about extra income, providing live streaming and video recording can reach more legislators.

If saving taxpayer money is of any concern, providing video would be cheaper than the “Y’all Come and Be Paid” policy.

Even if a legislator is viewing from home a simple text message to the committee chair or some member would enable the legislator to get a question asked.

Video Streaming Here Now: When the article was written in 2017 the Senate did not yet have video streaming.  Both the Senate and House now live stream and record meetings. Therefore, there is no good reason to keep spending taxpayer money on legislators who sign in to committees on which they don’t belong.

Signing In To Fund Their Houses and Apartments: Instead of staying at a hotel, the smart legislator can buy a Little Rock house as an investment and use the Y’all Come And Be Paid law to make the payments. Nice investment. An out-of-town legislator who buys a house in Little Rock has an incentive to sign in to committee meetings on as many days as possible to cover the house payments and pocket some spending money.  Even an out-of-town legislator who rents an apartment in Little Rock has an incentive to pad his or her expenses by signing into meetings as many days as possible to pay the rent and pocket some money.

Video streaming of legislative committee meetings is here. Tell your legislators to end their wasteful Y’all Come and Be Paid law.

By the way, legislators get a state payment for meals when they come to town even though on many days during a legislative session, they get three free meals from lobbyists. (See AR legislators pocket YOUR money when lobbyists buy their meals and drinks)

[ii] David Ferguson is a former Director of Arkansas’ Bureau of Legislative Research, having a thirty-two-year career as an attorney for the Arkansas legislature.