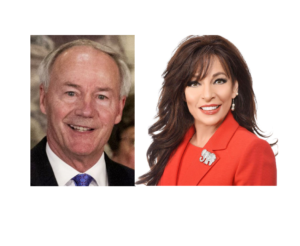 An initial glance at a poll on the Republican primary for Governor shows good news for Governor Asa Hutchinson, but he must be troubled by the poll.

The poll conducted by Talk Business & Politics-Hendrix College of 676 GOP voters puts Hutchinson in the lead with 57.5% support compared to Jan Morgan’s 30.5%. Twelve percent (12%) are undecided. The poll has a margin of error of +/-3.8%.[i]

Good news for Hutchinson: The poll shows a substantial lead with just under a month to go.

Bad news for Hutchinson: When Jan Morgan began her campaign earlier this year she had essentially zero name recognition, yet she has gained substantial momentum in the last two months. In January few knew her name, unless they had seen her on Fox Business News where she has been a regular commentator on Second Amendment Rights.

With Hutchinson’s left leaning record on social issues and a record of government growth and taxation the Governor’s best card is to – try to keep people from hearing Jan Morgan’s message.

There may be an opportunity to see the candidates at the same event, the Boone County Republican Lincoln Day Dinner on April 28. But, don’t get the idea the governor will make the mistake of allowing a debate. One would assume he will insist on speaking last so he can make claims without being refuted.

The Jan Morgan candidacy has become a grass roots movement. Some Morgan supporters even brag about taking the initiative to get campaign signs printed for themselves and neighbors. On the other hand, as an incumbent Asa has a HUGE campaign war chest and he will blanket the media with his face and talking points.

Further bad news for Asa. Even if Asa were to win the Republican nomination, disaffected conservative Republicans may not vote for him in the general election or may even vote for the pro-life Libertarian candidate. Why might some conservatives be willing to risk a win by a Democrat? Some think the Republican majority in the legislature would accomplish a more conservative agenda if they were fighting a Democrat as governor instead of being undermined by Asa.

Does it sound farfetched that a Republican majority might accomplish a more conservative agenda without Asa, even if there was a Democrat governor? If it does then consider what left-wing Democrat-Gazette columnist John Brummett told liberals in 2014 when Asa ran for governor against Democrat Mike Ross. Brummett told his readers Asa was posturing for conservatives and would be better for liberals in being able to keep Obamacare Medicaid Expansion (then called “Private Option” but renamed “Arkansas Works” by Hutchinson). He insinuated the Republican legislature would have run roughshod over Ross, but Asa could work within the Republican ranks to advance left leaning policies. Brummett was accurate in his prediction. Also note despite being a left-winger, Brummett continues to be a big defender of Asa.  (See Brummett quote below in notes. [ii])

If you want to learn about the candidates:

But these websites are just a starting place. Make sure the candidates are being clear about their positions. For example:

Check out the claims of both candidates because you won’t have the opportunity to hear them debate.

[ii] “Ross is fully committed to working as governor to continue the private option. Hutchinson says he’ll do the right thing and that we need, you know, to, uh, study this sonofagun closely. Discerning observers know that Hutchinson is simply trying to finesse the issue to keep his right flank from frothing. Discerning observers know he is going to keep the program after putting some conservative-seeming bow on it. As I’ve written, because it’s true, Hutchinson could succeed more easily than Ross in getting a decisive few Republicans to vote for the private option. That lets Hutchinson get away with pandering to the right wing while also giving him implied credit for doing the right and pragmatic thing. Oh, well. Democrats have gotten away with such finesses in Arkansas for decades.”  http://www.arkansasonline.com/news/2014/jun/17/advantage-asa-20140617/