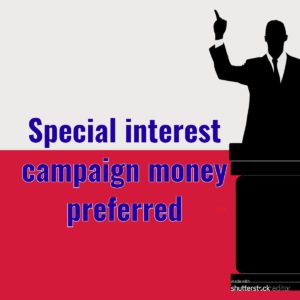 The tax task force is recommending the repeal of a little used tax credit. If you make a political contribution you are entitled to an income tax credit of up to $50 (or $100 for a couple filing jointly).

The task force estimated the tax credit only benefits tax payers by $500,000 per year.  That represents only 10,000 Arkansans. We wonder if the number of people taking advantage of the tax credit will increase on taxes collected this year because gubernatorial candidates Jan Morgan (Republican) and Mark West (Libertarian) relied heavily on small contributions from individuals.

If the tax credit is not having a big impact then why not repeal it? Before you decide, let’s talk about the big picture.

There has been a significant trend by the Arkansas legislature to limit the influence of grass roots groups of voters and to limit the influence of small associations that can’t spend big bucks on lobbyist expenses. The trend also solidifies the power of big special interests (such as Walmart, hospitals, nursing homes, and other Medicaid Providers, insurance companies, and big businesses that rely on state government handouts and grants.)

Lets first talk about the tax credit politicians want to repeal, then we will list other changes that favor the special interests.

The Proposal To Repeal Tax Credit

A grassroots campaign has an uphill battle getting the candidate’s message out because it takes money.

It takes a lot of $50 and $100 donations from individuals to try to counter the money special interests can pour into campaigns.

No grassroots campaign has effectively gotten out the message – Contribute $50 to my campaign and reduce your state income tax by $50. Special interests fear that could happen.

INFORMATION YOU CAN USE….

Here is the link to Commerce In Action. https://commerceinaction.org/

Its interesting that Democrats have been silent on the idea of ending the tax credit for political contributions.  Democrats are the ones who typically call for public funding in elections – something we oppose.  But, getting your money back from the state after making a political contribution is as close to public funding as they will ever get in Arkansas.  Why are they silent? Perhaps because Democrats too, depend on campaign contribution from the same big special interests as Republicans, and because small donor contributions are wild cards that might favor a challenger.

There have been a number of legislative changes that favor big special interests over individuals.  We are not saying these moves were part of some big plan.  But we can’t help but notice individuals and small associations have been put at a disadvantage over the years.

In the name of good government, the legislature proposed and the people passed a prohibition against lobbyist gifts to elected officials. We agree lobbyist gifts should be prohibited.

The loophole was designed to keep perks flowing from big special interests and their lobbyists, while eliminating the competition from smaller lobbying interests (such as small associations).  How so? The loophole allows lobbyists to wine and dine legislators IF they invite all the members of the House of Representatives or all members of the Senate or a legislative committee. Spending big money on meals and drinks for large groups of legislators is no problem when you are a big special interest that stands to make millions or billions off the state. Small associations with less money used to be able to get the ear of a few key legislators over a burger and beer at Does Eat Place. They can’t do that anymore. It should have ended with no exceptions for the big boys.

Is this a big deal?  Well, consider that during a legislative session most meals for the legislature are provided by big special interests and their lobbyists. (Frequently it is all three meals plus a cocktail reception).

From reading the “no lobbyist gifts” legislation, we think it was written to protect the big special interests and the perks legislators get..

The loophole for big lobbyists “events” needs to be repealed. Will your Senators and Representatives try to repeal the loophole?  Are they bold enough to go against the big lobbyists and their colleagues who love the perks?  The effort is not one for a weak-kneed legislator because the effort to repeal the loophole will upset big lobbyists and legislators who like the perks. (Remember you the taxpayer already pay a per diem of $59 a day specifically for their meals and incidentals, whether they spend the money or not.)

One of the “reforms” proposed by the legislature and passed by the people, prohibits businesses from contributing directly to a candidate’s campaign. Good thing, right?  Well, not so quick.  The prohibition affected mom and pop stores or other Arkansas small business but hasn’t had any effect on campaign spending by big business and big special interests.

While the legislature put on a show about stopping businesses from contribution to campaigns, every legislator knew big business was already funneling contributions through political action committees (PACs) and therefore the restriction would not have any impacts on them.

Medicaid providers and other big corporations that making big bucks off of state government were already funneling political contributions into campaigns by donating to multiple political action committees (PACs) that funnel the money into the campaigns.  But politicians only get upset when PACs are used by those who want less government.

Some small business owners, realizing their voice has been diminished, have trusted Commerce In Action to be their PAC.

In 2014 the legislature used a Trojan Horse to get people to vote for longer term limits. (Sixteen years but could be as much as 22 years in the Senate) Whether you are for are against term limits, the reality is, it is easier for big money lobbying interests to keep a legislator in office than to take chances on picking among candidates where there is no incumbent.

The House of Representatives with 100 members has been a bigger challenge for lobbyists than the Senate with only 35 members. Rules changes in the House have made it much easier for special interests to influence the House. The rules changes have added power to the Speaker of the House.

Chairs and vice chairs. Several years ago, the House Rules were changed to allow the Speaker of the House to appoint the chairs and vice chairs of House committees and subcommittees.  Previously the leadership positions were selected by representatives by seniority.  The seniority system made it difficult for special interests because the next representative in seniority for leadership could be someone who was not inclined to be the vassal of the business interest. Giving the power to appoint chairs and vice chairs to the Speaker gave the big special interests a much better opportunity to influence who would be the chair or vice chair…. especially by influencing who is elected Speaker.

The rule change worked so well for the special interests (especially Medicaid providers) that the next rule change put even more power in the hands of the Speaker.

Back To The Issue Of Repeal Of The Tax Credit