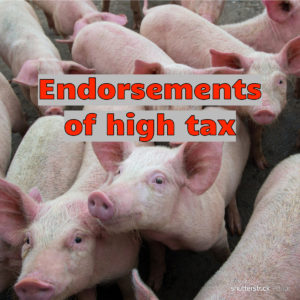 Governor Asa Hutchinson says his top priority for 2020 is to pass ISSUE #1 which would impose a permanent one-half percent (0.50%) sales tax to be used for highways and roads.

What he doesn’t want you to think about is:

Passing the tax is not just bad, it is crazy.

You can expect the Governor to present a list of those who support the tax. But, the list won’t mean much since the endorsements will be from those who risk nothing and can benefit by playing ball with the governor.

Although the list is not out yet, the usual suspects include politicians who don’t have an opponent, the Chamber of Commerce, and big businesses that receive taxpayer money.

The only thing that stands in the way of Asa’s well-funded effort to pass his crazy tax is an educated electorate. Don’t let your neighbors and friends fall victim to being “low information voters.”